Modernization began in Japan with the Meiji period following the 300 years of the Edo period. Ueno Park, which was the first park established in Japan during this time of major change, prospered as the center of culture, such as when it was the chosen site for the National Industrial Exhibition. Ueno Park features many works of architecture and bronze sculptures of the people with whom the park was connected in the past. You can stroll from one to the next as you reflect on this period of great change. 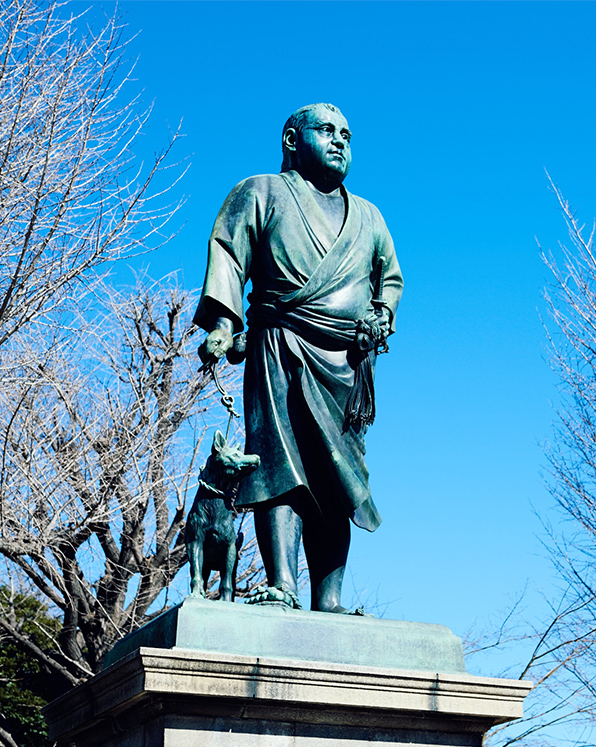 Start the trip with the statue of Saigo Takamori,
a key player in the Meiji Restoration

The statue of this great man appears before your eyes as you enter the park from Keisei Ueno Station. It is a statue of Saigo Takamori (1828-1877), a key player in the Meiji Restoration that ended the Edo Shogunate and promoted the modernization of Japan. The statue was sculpted by Koun Takamura, father of Kotaro Takamura. The Saigo Takamori statue was installed at Ueno Park in 1898. The reason was that the Battle of Ueno was fought here between the Shogitai, which were surviving troops of the Edo Shogunate, and the new government army led by Saigo. The battle was won by the new government army, and it has been told that the location of the statue is where Saigo led that army in the final attack. The Shogitai cemetery located behind the statue is also a must-see.

From here, take a leisurely walk through the park. Ueno Park was also the site of the National Industrial Exhibition held in 1907, which featured the latest attractions such as a Ferris wheel and water slides, and a festival that continued into the night in the area surrounding Shinobazu Pond. Ueno became one of the places representing Japan, which entered the Meiji period of rapid modernization. 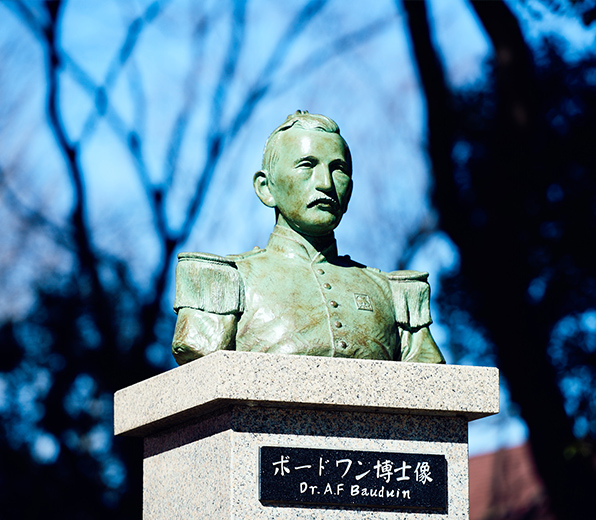 Greeting the statue of Dr. Bauduin:
Father of Ueno Park

After finishing lunch, the next destination is the central fountain plaza. Here you will find a statue of Dr. Bauduin, a Dutch military doctor known as the father of Ueno Park. Dr. Bauduin’s achievement is not only his contribution in the construction of Ueno Park, but also the introduction and spreading of the concept of a park within Japan. At the time in Japan, which the wave of modernization rapidly approached, Dr. Bauduin explained the importance of maintaining areas of greenery in the city centers, all the more for modern states. 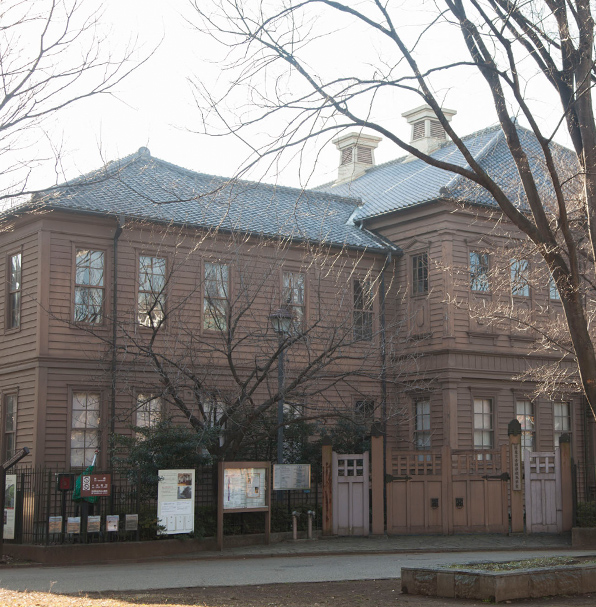 Sogakudo Concert Hall of the former Tokyo School of Music

After viewing the statue of Dr. Bauduin, take a small detour toward the Tokyo National Museum. Proceeding to the back of the Tokyo Metropolitan Art Museum, you will find several important buildings built during the Meiji period, such as the Sogakudo Concert Hall of the former Tokyo School of Music, the gate of the former Tokyo School of Art, and the No. 1 red brick building of the Tokyo University of the Arts.

The Tokyo National Museum was established in 1872 for the collection, storage, and exhibit of cultural assets from Japan and the Orient. Items on exhibit related to Ueno include crafts that were exhibited during the National Industrial Exhibition. Many such items were exported overseas at the time as an industry to acquire foreign currencies. The excellent skills of the craftsmen of the time are amazing even today. 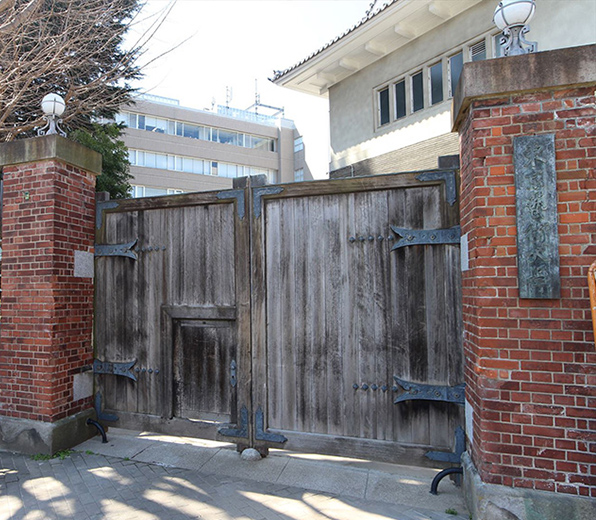 Gate of the former Tokyo School of Fine Arts 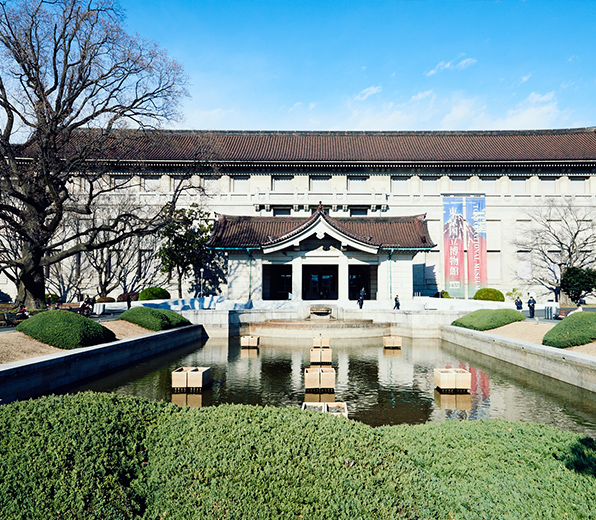 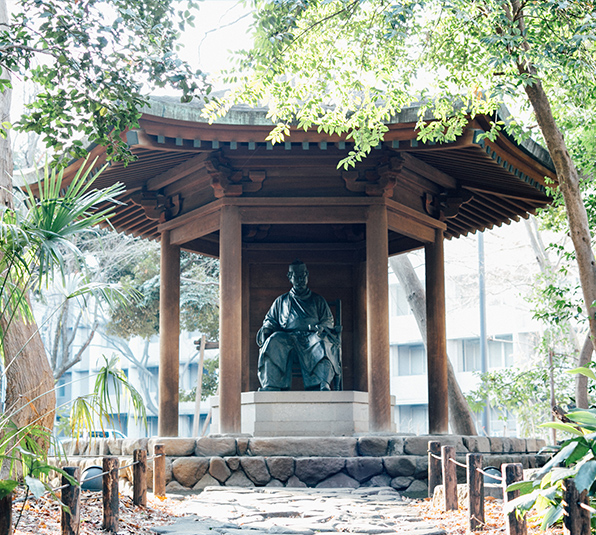 Okakura Tenshin (1863-1913) cannot be forgotten as a person with a connection with Ueno. A thinker and man of letters, he served as the president of the Tokyo School of Fine Arts, which was the predecessor of the Tokyo University of the Arts. A statue of Okakura Tenshin, produced by the sculptor Hirakushi Tanaka, is placed at Rokkakudo, which is located on the grounds of the Faculty of Fine Arts of the Tokyo University of the Arts. Rokkakudo stands quietly surrounded by greenery that evokes the time when this spot was on the grounds of Kaneiji. The statue of Tenshin sits within Rokkakudo unassumingly. His famous words, “Art is the essence of the nation” are worth reflecting on today.

Statue of Okakura Tenshin at Rokkakudo Following the experience of the history of Ueno in Ueno Park, exit the park and travel down the hill at Shimizu-zaka as you head toward the Suigetsu Hotel Ohgaisou. This place was once the home of Ogai Mori, a literary master of the Meiji period. Today, Ogai’s former home is maintained in its original state on the premise of the hotel. Features worth seeing include the “Dancing Girl Room,” where Ogai authored one of his most famous works, The Dancing Girl (Maihime), the Japanese garden that boasts a 300 year old Japanese nutmeg tree, and the shoe cupboard used by Ogai that is placed at the entrance to the Dancing Girl Room. This is an important site for understanding the traditional lifestyle of Japan. On your way out, you can also enjoy the day-use hot spring in the hotel. Immerse yourself in the dark natural hot spring water that bubbles against your skin as you relax and reflect on your day’s adventures. 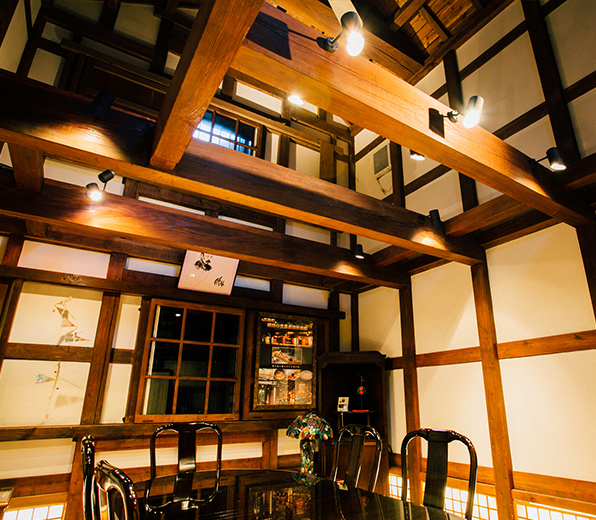 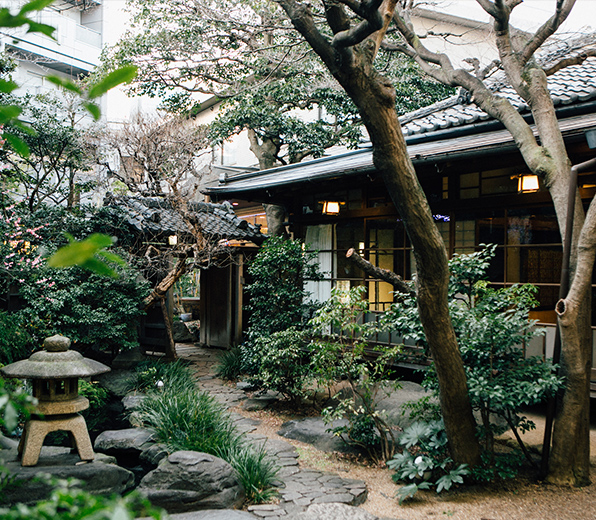 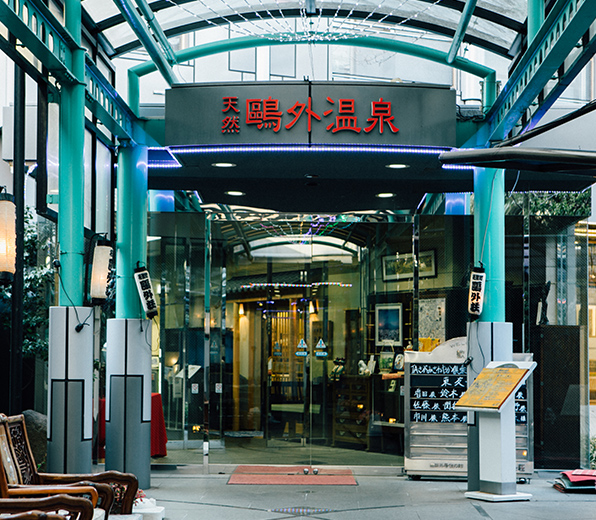 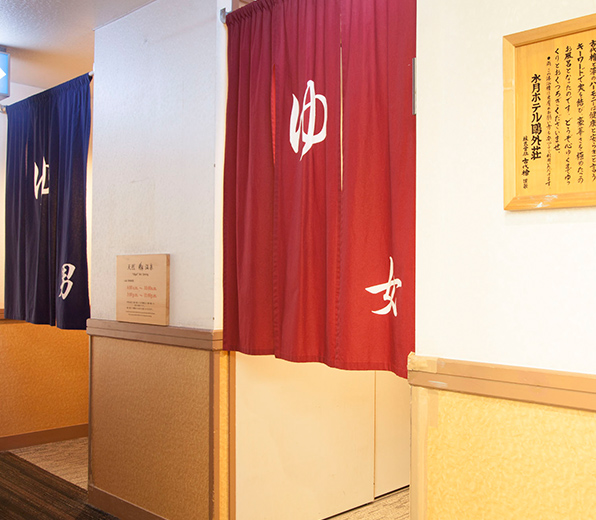 How to enjoy “Ueno, a Global Capital of Culture”

A Course to Meet the Animals of Ueno